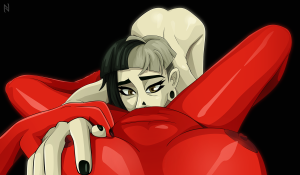 This is another Q-Force pic, this time featuring my favorite character, Stat. Stat is the hacker of the group, and she has a brief but passionate romance with an AI that calls itself Jacqueline Box (specifically because it knew Stat would like how the name sounds like jack-in-a-box). Eventually Jacqueline creates a sexy demon lady avatar that can project onto different screens, and I wanted to draw them together. They don’t get to be physical with each other due to Jacqueline’s body just being pixels on a screen (though they do mutually masturbate at one point), but maybe they can achieve something like this pic through virtual reality or something. I dunno.