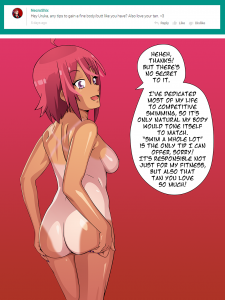 This is a case of me choosing to answer a question largely just because I wanted to draw the character again. We Never Learn is an anime I watched not that long ago when it originally aired, and I did one pic of the three main girls. At the time it was a simple pin-up style pic, just because I wanted to make sure I drew them while I was still into the show. The fact that I haven’t done anything with any of the series’ character since then is proof enough of why I needed to act then, haha. Uruka might be my favorite character from that series, and I’ve always intended to do something more with her at some point (there’s a good chance she’ll show up around the pool in the Studio Tour eventually, though probably not as a full character). This Ask was a good excuse to draw her again, even though the question of how an athlete who’s life goals all revolve around swimming manages to stay in shape is pretty self-evident.