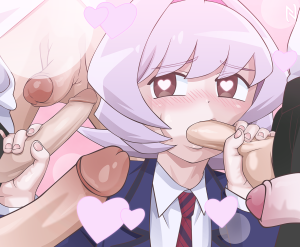 Osana Najimi is a character from Komi Can’t Communicate who serves as the polar opposite of Komi. Where Komi can’t speak even a word to anyone else, Najimi is a chatterbox who’s always talking and cracking jokes, and has a storied childhood friendship with everyone they interact with in the show. Najmi makes friends easily and has an endless sea of them, so I thought it’d be cute to do a little blowbang pic with them. Here’s that, but I do plan to draw them again in the future. They’re extremely cute, and my other favorite character from this show alongside Himiko.