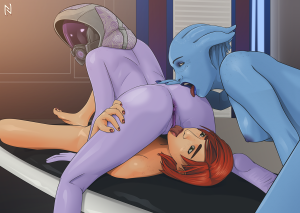 The Near Hentai Monthly Lady for March 2022 is Tali’Zorah from Mass Effect. I never played the Mass Effect games, and I largely just know the world and characters through adult SFM animations, but Tali’Zorah is a character that did stand out to me when I first saw her. I like her mysterious helmet (though I believe we see under it in the games at some point? I’m not really sure), and I thought her overall look was pretty cool and appealing. I decided to pair her up with two other ladies I like from these games, the female version of protagonist Shepard, and Liara T’Soni. Liara also has appeal as a colorful alien girl, and while I like the features of her race in general, her face in particular was always very cute to me. I considered throwing in others, but I decided I’d probably end up overcrowding the picture if I threw in all the babes I know from SFM animations, but if people like this pic I might revisit the series, I dunno. I tend to stay away from video game art, mostly just because I feel like the SFM and Blender animators can cover that area better than I can, but I wouldn’t be opposed to doing some art of Miranda Lawson or Jack or someone.

With this post, NHML nominations for the month of April are now open. For those who don’t know, I’ll run down the rules real quick. Nominations are limited to one per person. You can nominate any female character you want, provided I have not drawn her within the past calendar year (though I prefer characters I’ve never drawn, period). Previous NHML winners are not eligible for a second time. Nominees must also not be from the same franchise as this month’s winner, Mass Effect. If you violate any of those rules, I’ll let you know, and you can nominate someone else. I know it can be hard to keep track of these things. You may nominate by either commenting in the cBox, commenting on this post, or emailing me (Nearphotison2010@yahoo.com). I’ll compile a list of the nominees in the sidebar of this site, and then on April 1st I will use a randomizer to select the winning character who I will proceed to draw sometime that month. I look forward to seeing who you all nominate this time around!

Even though I’ve never really played Mass Effect, I’m very familiar with its porn. I’d like to eventually do several SFM videos based on the series (in addition to this one, I definitely want to do at least a FemShep one, a Miranda Lawson one, a Jack one and a Tali’Zorah one). This video started out as just a Liara video, but then there were some great clips of not only other asari characters, but tons of asari OCs, so I decided to instead dedicate the video to the entire race instead of just her (though Liara does make up about 70-80 percent of the video, I think). Since the scope was so broad, and there’s a shit ton of Mass Effect SFM content out there, this one ended up being pretty long. I think I could honestly still make a whole extra video without re-using clips, but for now this is good, I think. Enjoy!