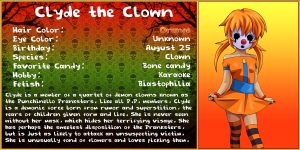 I’d originally planned for the Bio pages for both of the clowns to go public in the year between last year’s Halloween and this one, but never really got around to it now.

Clyde’s the loli of the group, and the only one without a dick. When I first decided to make both Blinky and Clyde, and immediately pictured Tear from “That Time I got Reincarnated as a Slime”. I like the idea of her being the cute, quiet, nicest one of the group, but if you took off her mask you might see some Lovecraftian horror that’ll scar you for life, if you survive.

By Nearphotison on Wednesday, October 5, 2022 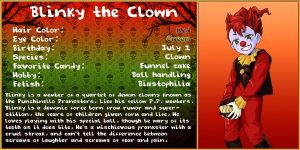 I’d originally planned for the Bio pages for both of the clowns to go public in the year between last year’s Halloween and this one, but never really got around to it now.
Blinky’s the only boy of the group, a predictably mischievous prankster-type shota. I worked in a bit of a fiery element to his look, since he was gonna be red anyway. I also thought it’d be fun for him to have a langolier ball, although I highly doubt it’ll play into any pics with him. However, if you imagine what he’d be like in a horror movie, you can imagine him doing clown tricks with it like it was a regular rubber ball, then throwing it at some hapless victim.
Continue Reading
0
Spookyverse Spookyverse Bios 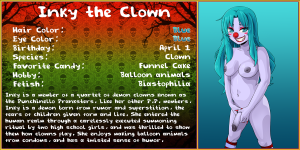 And here’s the bio page for Inky. With both the established clowns out of the way, the next bios will be for Blinky and Clyde.

By Nearphotison on Thursday, February 3, 2022 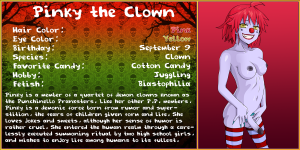 I mentioned in the  Halloween special that I wanted to do bio pages for the clowns as a way to introduce all four of them, but I wanted to get Pinky and Inky’s bios out of the way first. So here is the bio for Pinky the Clown. Hopefully I’ll get around to Inky’s before too long, and then I can introduce the other two later! 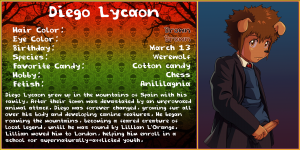 I can’t believe how long it took me to get a second Spookyverse Bio page out, but here we are. Originally I’d planned to release these in the same order that the characters were introduced (meaning this one would’ve been Adeline’s), but I abandoned that idea. Instead I wanted to do the page of the Spookyverse’s lone male character (as of right now), werewolf pup Diego Lycaon. Diego’s proven relatively popular with some folks, which I’m very happy about. Both times we’ve seen him in the past he’s appeared completely nude, but since I usually like to have characters at least partially dressed in these bio pages I thought he’d look cute in a little school boy’s uniform. I didn’t want to go full PG, though, so he’s got his dick whipped out for those of you into that sort of thing.

Also, here is the Q&A video I did for my subscribers last month, if anyone’s interested:

If you’ve followed my work for any length of time, I’m sure you’ve seen some of the bio pages I’ve made for my Applebridge OCs. Recently, it was suggested to me that I do similar pages for the Spookyverse characters, the cast of supernatural characters I pull out around Halloween time. I thought it sounded like fun, so I changed up the formula a little bit to kick off this other bio series. I had to do Lillian’s first, as she’s the oldest and most central figure in this lineup. Lillian predates the Near Hentai brand by a good many years, being one of my characters back in high school, and she’s been the figurehead of the Halloween pics. In many ways she fills the role for the Spookyverse cast that Siat Wildstar does for the Studio. Anyway, here’s her page, I hope y’all like the design and find these bios fun and engaging. I’m not sure how frequently I’ll be doing them, but I’m sure there’ll be more before too terribly long.