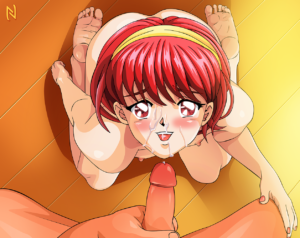 So this one might feel like it’s coming out of nowhere for a lot of people, and I can see why. For background, Tokimeki Memorial is an older game that’s widely looked to as the codifier and popularizer of the dating sim genre. There’d been some dating sims before it, of course, but Tokimeki Memorial was the first big mainstream dating sim produced by a major gaming company (Konami). Shiori Fujisaki is the main girl of this game, the one on the cover of the game, its soundtracks, it’s spin-off media, etc. She’s the main character’s childhood friend and a pure cinnamon bun of a high school girl, the hardest girl to get the good ending on. I’ve been learning about Tokimeki Memorial lately, and in the process Shiori’s been put on a bit of a pedestal for me. Knowing so many young men in the nineties spent countless hours working just to unlock a cutscene where she confesses her love to them makes her feel pretty special, even if I know she probably would not be the girl I would go after first, second or even third in that game.
At any rate, while learning about this tame, PG dating sim, I couldn’t help but think about my own, slightly less-than PG game. I just got really attached to the idea of being able to have this iconic, historically relevant dating sim girl in my game at some point. Now, that’s not to say I definitely plan to add her at some point or anything, but I wan enamored enough just by the possibility that I decided to draw her to officially bring her into the Studio. Maybe she’ll show up in the Studio Tour in some later update, maybe not, but I like having the option. If people like Shiori I’d be happy to draw her again outside of the game, too, in Asks or maybe in pics with some of the other Tokimeki Memorial ladies.
Continue Reading
1