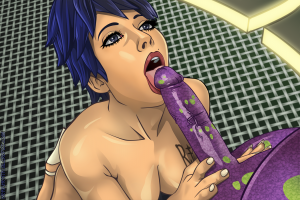 WWOEC’s Woman of the Month for August 2014 is Six of Nine from Tripping the Rift. I remember when this show came on, and it always looked really, really bad to me. Part of it was that the CGI used to make the show looked like ReBoot (several years after ReBoot), but mostly it was that the show seemed to go out of its way to be unappealing. I never even really found Six of Nine, the character who was a walking sex joke, to be that attractive thanks to the ugly way she was animated. That being said, I did try to make her visually appealing here, since the design itself was never a problem for me.

Anyway, I’ve actually watched a couple episodes now while preparing for this pic. I think I was right to pass on it when it aired, since the show was not only ugly and unfunny, but pretty offensive as well. I just don’t have anything nice to say about it. Hopefully you guys can enjoy this picture, though.