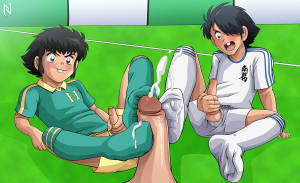 So this commission is for a franchise I know virtually nothing about. I’ve of course heard of Captain Tsubasa, but I don’t know anything about the characters (I can’t even tell most of them apart when I see them). These guys appear to be named Masao and Taki, but I don’t know anything about their relationship to each other or to Tsubasa (whose cock I believe this is meant to be). The client said they were thanking/rewarding him, though I don’t know why or for what since they appear to all be from separate teams. It’s my hope anyone who’s familiar with the franchise will recognize some dynamic I’m unaware of and that will elevate this pic for them.