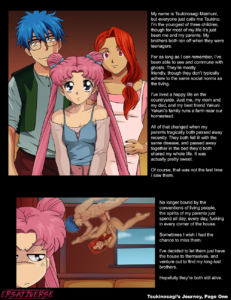 So here’s page one of a project I’m calling “Tsukinosagi’s Journey”. I wanted to tell some stories set in the Ersatzverse, but I didn’t want to do a full-blown comic or anything, as I thought that would take up too much of my time. I settled on this, a sort of half-way between a regular comic and prose, which will hopefully be possible to update with some regularity without interrupting my normal comics work too much. I’m considering trying a few different approaches with this Ersatzverse concept, possibly there’ll be just regular fiction set in this universe or standalone one-page comics or pics, I don’t know. For now, though, Tsukinosagi’s adventure will be chronicled like this. In this page we also get to meet the mother and father of Tsukino and her brothers. They’re also both knock-offs like everyone in this universe, with the dad being named Inamo Maimuni and the mom being Furumi Maimuni. This is probably the only time we’ll see either of them, their death and haunting really just serving as the genesis to Tsukino leaving her home to search for her brothers. I have a number of misadventures planned for this young lady, hopefully you’ll get to see them all eventually.
I don’t know when the next page will be, but hopefully it won’t be too far off from now. There will probably be other Ersatzverse stuff dabbled in by then, but we’ll see.
Continue Reading
0