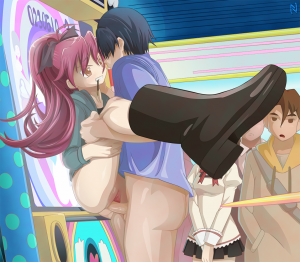 Here’s another commission I did recently, and the first straight pic I’ve had to share with you guys in a while. Here we see Kyoko Sakura having some fun at her favorite hangout, the arcade.

The client was wanting to see some interesting colors for this one due to the setting. While there was the temptation to have the pic be extremely dark with neon pinks and green or something, when looking at actual scenes in the show’s arcade they were usually brightly lit. I decided to go with that option (using the exact colors from the show) since, not only did I think it looked better, but it also made it easier to see the crowd that’s gathered around them.

It’s been a long time since I watched Madoka Magica, but at the time I enjoyed it (less so the movies that followed). Kyoko was one of my favorite characters, I thought she was a lot of fun and had a really cute design. I always thought I would draw either her or Sayaka eventually, but surprisingly it took a commission for me to actually get around to drawing one of them. Hopefully I’ll get around to more of the Madoka girls eventually, they’re all really cute in their own ways. Plus, it’s nice to see them getting to have some fun after all they went through in the series. ^_^