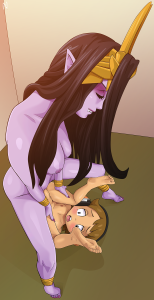 This is another annual commission for one of my Master Tier Subscribers. This one’s an odd one, and I think it exists mostly as a way to get these two characters into the Studio. At the very least, the commissioner said they felt their wasn’t enough art out there of either character. Yaksini is a demon enemy in Shin Megami Tensei, and I don’t think there’s much to the character beyond that. Eddie Archer (Imada Kanchi) is one of Nate’s friends in Yo-kai Watch. Other than maybe a loose relationship with the supernatural these two have nothing connecting them, but here they are anyway. The commissioner wanted to see them in the Amazon position, and I went with a high angle to really highlight their already noteworthy size difference.