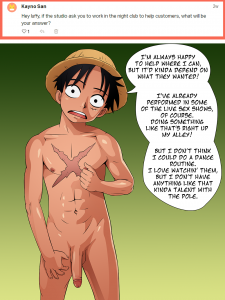 Like Luffy mentions here, he has performed in what I’m calling a “live sex show” in the NHS strip club before. It was a One-Shot I did in November of 2019, but I think what this Ask is aiming at is more along the pole dancing variety. I don’t know why, but I just can’t picture Luffy doing that, personally. Maybe I think he’d just goof off and not be sexy, it’s easy to picture a humorous image of him wrapping around the pole like a snake and grinning like an idiot. So for that reason it’s not something I’m personally interested in drawing, but I felt like it was a concept worth adressing.