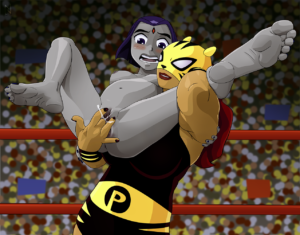 I don’t recall these two ever interacting in the show, but I still really wanted to draw them together. Raven getting handled by a big, powerful woman hits a good spot for me, so I made it happen. In the original show, Cyborg has to recruit Pantha while she’s wrestling a match, and ends up dragged into the ring. This pic basically reimagines that scene if it was Raven who’d been sent to recruit her instead.
Like I said, I really like this dynamic between these two, and would definitely like to revisit them. I can easily imagine doing one of my one-off comics like the City Hunter, Harley Quinn and Batgirl ones, just focused on these two. I guess it’ll depend on the reaction this pic gets, ’cause if I’m the only one into them I won’t bother wasting everyone’s time.
Pantha Raven Teen Titans
3
Previous Post
Next Post