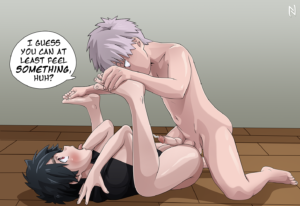 This is a little pic I wanted to do of Kabane and Shiki from the recent series Kemono Jihen. Kabane in the series doesn’t experience pain or anything, though he is shown enjoying pizza so I assume he has some sort of nervous system receptors. I dunno if this pic really contradicts anything we learn about him later on, as I’ve only watched the first couple of episodes (and probably won’t see too many more in the future, if I’m honest), but at the very least I like breaking his usual stoic facial expressions a bit for this. I’ve got one other Kemono Jihen pic in the works featuring both these boys and a third from the series, but I can’t say for sure when that one will come out.