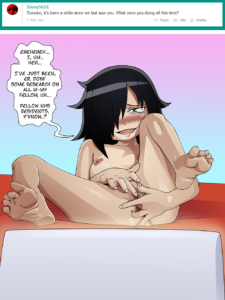 I actually started re-watching WataMote recently, showing it to my younger sister who’s never seen it. I had a handful of pic ideas for Tomoko from back when I first watched it, but unfortunately I never got around to do any of them except her MomSwap entry. Maybe now that I’m revisiting the show I’ll dust off some of those pic ideas, I don’t know, but when I saw Tomoko getting asked a question, I figured now was the perfect time to do something with her again (and I did check with the subscriber who submitted this question to make sure I had the right Tomoko).
Most people, when put into the Near Hentai Studio environment, end up hooking up with a lot of different characters. I don’t really see that being the path for someone like Tomoko, though. When I think of Tomoko going out into the Studio (which may not even be that often, being a bit of a shut-in), and I picture her running into someone she’s attracted to, I just don’t picture her hooking up with that person. I see her awkwardly stumbling through a conversation, then running back to her apartment to look up that person on nearhentai.com and furiously masturbate to them. So that’s what we see here!
Character Asks Tomoko Kuroki WataMote
2
Previous Post
Next Post