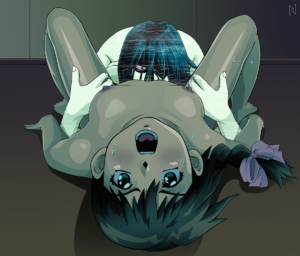 As part of a bigger project I made an AMV for Ghost Stories not long ago, and made a mental note that I wanted to do this pic for October while I was working on it. For those who don’t know, Ghost Stories is a spooky ghost anime that got a gag dub when it was localized. The dub team decided they didn’t want to take the dubbing seriously, so they let loose with how they dubbed it, and it basically turned into what we think of as an Abridged Series these days (except full-length).
The main ghost of episode eighteen is Akane-san, a girl who died of a heart attack while doing a radio show. For some reason this makes her a TV ghost, complete with coming out of a TV, like Sadako from The Ring. She attacks Satsuki, one of the main characters, and the animation is pretty sensual, with her stroking Satsuki’s legs and kinda crawling up her body. In the English dub, they have her say Satsuki is “definitely a ten” (she has a counting gimmick, too, that’s the secret to defeating her), and Satsuki has some internal dialogue about how she always attracts the lesbian ghosts. Anyway, I obviously decided to draw a different sort of attack, which is what we have here.
Continue Reading
0