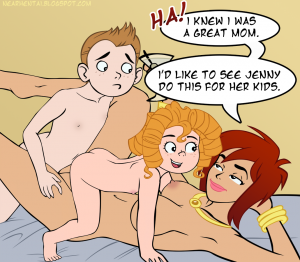 The WWOEC Woman of the Month for May 2014 is Rudi Wilson from Hulu’s Mother Up! Since WWOEC is currently down (for how long, I do not know), I’m posting my contribution for the month here in case the site isn’t up again before June.

Rudi was nominate by Pandora’s Box, an artist you all have seen me color a few times in the past. Knowing PBX’s taste, I figured I had to go incest this month, and it wasn’t a hard decision to make when I saw how cute her daughter Apple is. So both Apple and Dick ended up in the pic, but I think I’d like to do a separate Mother Up! pic at some point in the future featuring the neighbor Sarah, who is by far my favorite part of the series.

Speaking of the show proper, I hadn’t heard of it before. I went in to watch a few episodes for this pic and, while I like a lot of the character designs and the animation is fine, it didn’t really click for me. I think Rudi is just too unlikeable for me to root for her, and she’s not funny enough for me to forgive her character flaws the way I would a Homer Simpson. Maybe these issues work out later in the series, but in the episodes I saw I couldn’t really enjoy myself.

Also, I’d like to say I had very little time this month to work on this, so I decided to do flat colors like the show has instead of my usual approach. I think it turned out okay, but I may upload a different version in the future (though don’t count on it). Enjoy!