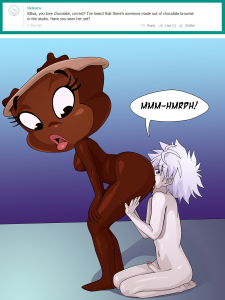 I hadn’t considered this crossover, but I do like the idea of playing into Killua’s sweet tooth. I wasn’t really sure if anyone would want to see more of the brownie lady, since she’s a lot more cartoony than the characters I typically draw, but I was eager to take a fresh stab at drawing her (since the other pic was so old), and hopefully this one turned out cute. 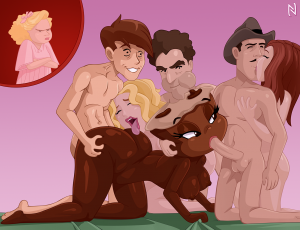 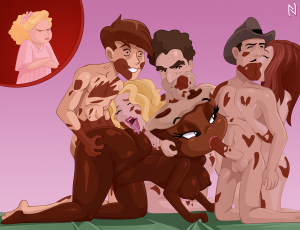 This is a pic I drew sometime in 2012, so if it doesn’t look quite up to snuff compared to my recent work, that’s why. The 2005 parody of Reefer Madness is perhaps my favorite movie musical, and anyone who’s seen that movie will probably remember the animated sequence where Jimmy eats a pot brownie and then proceeds to have sex with an anthropomorphic version of the brownie while singing about how good it is. The musical sequence ends with animated versions of most of the film’s cast all naked and covered with chocolate, with the brownie lady having several large bites taken out of her but not seeming to mind at all. I’m not really into vore or anything, but something about the concept of these humans gangbanging/eating a voluptuous brownie really spoke to me. So I drew this back then, but like many ideas I’ve had it ended up kinda petering out and sitting half-finished on my computer for years. At the time I drew it, there weren’t any pics of this brownie online at all that I could find, though thankfully a couple have sprung up in the intermediate years. There’s still not many, though, and when I revisited the film again recently I set my mind on also finishing this pic. So I cleaned up the inking, reworked some of the art a bit, and colored it. It’s still not perfect, but hopefully the concept will help carry over any failings of the art. I initially forgot to add the chocolate everywhere, so when I went back to add it I decided I’d just release two versions, in case the messy one is too unpleasant for some people.