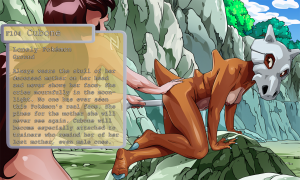 So, as I mentioned before, I found some time to wrap up this new Pokédex F entry. Honestly, I think she may be my favorite entry so far. I’ve always had a thing for girls with covered faces, either a helmet or a mask or something. There’s an air of mystery there, and I kind of like it. I’ve always thought La Mariposa was sexier than Lisa Hamilton, for example.

I debated with myself about the human in this one. I had considered using a male (hence the last line of the Pokédex entry), and have him buried in her pussy with the bone in her ass. In the end I decided it might be a while before another good opportunity came along for a yuri entry, so I made the human a female for the first time in this series.
Like I mentioned before, I don’t know when I’ll have something new to post. I’m working on a few things, but I plan to be back home next week and can hopefully ramp up production then. I’m looking forward to starting on the new comic pages, I have some fun ideas for both SES and ST. I’m hoping to also start a third non-commissioned comic, but I can’t decide between three ideas I’ve been sitting on for a long time (I think it would be a bad idea to try all three). We’ll see how it goes.