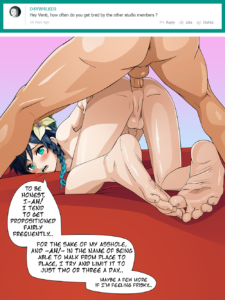 I admit, I didn’t really have much of an idea for how Venti would answer this one. Probably in part due to me having no familiarity with Genshin Impact, but also since it’s sort of a difficult question to really answer (I guess a simple answer would be him just shouting, “All the time!” or something, but that doesn’t feel correct). At any rate, I did come up with something eventually, but really I just figured people would enjoy seeing Venti getting bred, and I had a pose in mind I thought people might get behind. I decided to avoid pairing him with any specific character, I felt due to the nature of his response a rando anon would work better, but that allowed me to focus more on other details.