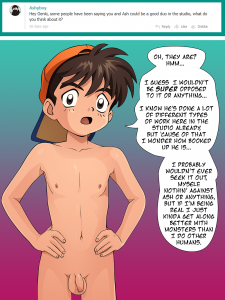 It feels like it’s been a minute since I’ve done a “standing around” Ask. I get why people would make a connection between Genki and Ash, since they have a lot in common, but for whatever reason I just can’t make it click in my head to make them a pairing. If it came up in a One-Shot or something I wouldn’t refuse to do it or anything, but it’s just not a pairing I think I’ll ever feel like doing on my own. If I did, it’d probably be something similar to Goh’s debut pic, where they’re getting fucked side-by-side by their monster pals, but if I did do that I’d probably feel inclined to include Tai and maybe some other monster trainer boys… and then at that point it’d probably become too big of a pic to be worth doing. This will be the last Ask I do for the July batch. The next point where I would normally do an Ask will instead be something new, so I hope y’all will be looking forward to seeing how that goes.