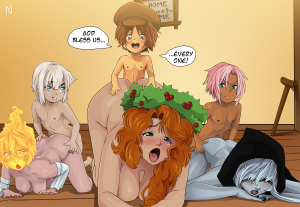 For the past few years, I’ve been piecemeal releasing parts for this series based on seeing Mace and Jackie in the story of A Christmas Carol. When I originally had the idea for this gimmick years ago, I kinda figured I’d close with Mace and Jackie fucking a loli version of Tiny Tim while she says Tim’s famous closing line. Now in 2021, though, I feel like that’s kinda a weak finish to the series as it’s been presented, so I decided to go this route instead. Rather than genderswapping Tim, he instead gets to join Mace and Jackie for a big finale where we bring back the three main ghost girls from the previous entries. I feel like, for what this series has been, this is a more satisfying climax. I hope you all like it, and Merry Christmas!