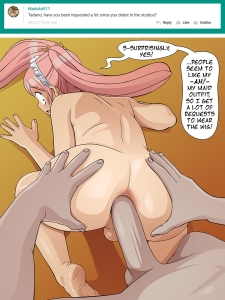 Funnily enough, this drawing was originally done for a different question (one by the same Subscriber, though). However, as I was working on it, they posted this question instead, which I actually liked better and I thought still worked with the art I’d already drawn. So I replaced the question and re-worded his response.
When I first started watching Komi Can’t Communicate, I didn’t think much of Tadano. I liked him, sure, but I wasn’t really attracted to him. I kind of figured I’d only ever draw him as a top for Komi and Najimi, and probably wouldn’t have much use for him beyond that. Then the end of the first season introduced Maid Tadano, and my position shifted considerably. I really like crossdressing Tadano, and the original question specifically referred to this version of him, hence the usage here. I don’t think I’ll be drawing Tadano in a wig all the time or anything, but one good, explicit look at this version of him getting railed felt necessary to me. I also thought it’d be cute to have him being fucked by the same anon he was blowing in his debut pic, so I re-used the skin tone from that pic here.
Character Asks Hitohito Tadano Komi Can't Communicate
1
Previous Post
Next Post