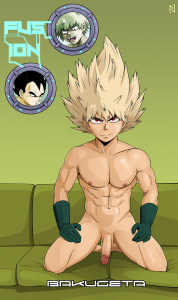 So this Fusion came about due to carelessness on my part, I suppose. The theme for this poll was “rival” characters, and historically I’ve always had ten options for people to vote on. At nine I was having trouble thinking of another good fit, so I threw Bakugou onto the list even though he’s been fused already. In what’s probably pretty predictable in hindsight, Vegeta and Bakugou won, meaning now both Vegeta and Goku have been fused with Lord Explosion Murder. I had two options here, either try and make the Vegeta/Bakugou fusion as distinct from Bakugoku as possible, or… lean into it. So I leaned into it, creating basically a brother for Bakugoku in Bakugeta. I even put them in the same location, just to drive the parallels home. Anyway, hope you guys like him.