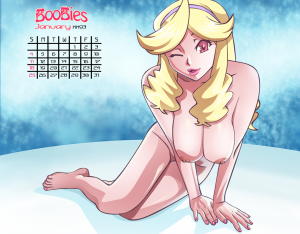 So this is a side project of mine that I’m pretty excited for. I’m a big fan of Space Dandy, the new anime from Shinichirō Watanabe. In the show, the main character Dandy is a frequent visitor to BooBies, an obvious Hooters parody. The idea for this series is basically a twelve-part pin-up series featuring the waitresses of BooBies. The only problem is, Honey here is the only prominent member of the BooBies staff. That’s right, I’m doing a twelve-part series featuring only one name character. I’m such a dork.

So, yeah, the other eleven entries in this series will all be actual characters from the show, but they’ll also all be nameless background characters. I think February’s girl has a couple of lines in one episode, but that’s as relevant as any of them will get. Hell, a couple of them aren’t even background characters, just designs shown in a panning group shot while the narrator explains what BooBies is in the first episode. This is obscurity for you, but the girls are hot so I hope you all can enjoy the pics anyway.