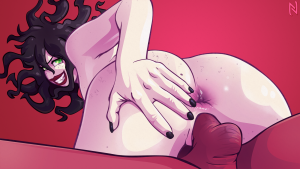 The WWOEC Woman of the Month for August 2015 is Sedusa from the Powerpuff Girls. I was excited when I first saw her name pop up, I used to watch PPG a lot as a kid and I always liked Sedusa. However, I soon found myself with too many ideas, and I struggled with picking something. Ultimately I decided to go with a simple approach, something I knew I could finish before the month was up. However, I have a lot of sketches lying around featuring her with the Powerpuff Girls, Ms. Bellum, previous WWOTM Ms. Keane, and in a variety of poses. I did a bunch of gang bang pics, but I thought they looked too much like last month’s pic. I drew her like you see her here, and also did some of her “Ima Goodelady” disguise. I don’t want to make any promises, but if I find the time I may come back to her later and flesh some of those sketches into finished pieces that I can post here.