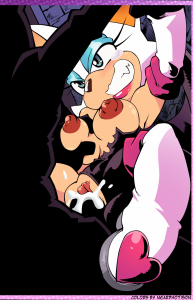 So one side effect of re-uploading old content (including old colorization projects that were released before the Blogspot site, but never uploaded there) is that I’ve been finding lots of my old projects. Some of these I want to try and work on again, and some were far enough along that it’d be silly for me to not wrap them up so I can get extra content to share with you guys. This pic, for example, was already inked and partially colored, so it only took me about twenty minutes to finish.

This is part of a set of twelve doujinshi pages I had set aside. They’re all splash pages from the ends of other comics (not related to the main comics, and without any story or anything). As best I can tell (and I’m not 100% certain on this), all twelve pics are done by an artist called Akuno Toujou, but I can’t be positive with the info I have. In fact, I can’t even guarantee they’re all the same artist, they just look to me like they could be, but they come from different comics in my collection and a several are clearly a different art style than the main story they appear alongside. Regardless, if you guys like this first one I may go ahead and try coloring the other twelve some time. They’re all Sonic pics in a similar art style to this one, so if you like this let me know. ^_^