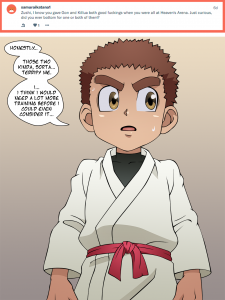 So this Character Ask was a bit interesting, just because I think the asker and I have very different reads on this character. I don’t really have any interest in seeing Zushi bottoming for Gon or Killua, and the more I thought about it, the more it seemed he would be intimidated by a prospect like that. If you look at his appearance in Gon’s Ask about him, Zushi’s terrified enough of fucking the two of them, but being on the other end must be pretty frightening considering he views them both as monsters. Nice, friendly monsters, but monsters nonetheless.

Also, for those interested, the fifth part of my look back at the superhero characters I made when I was a kid is here: