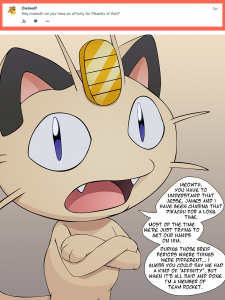 I went back and forth on how to handle this one for a long time. I felt like the asker was probably hoping to see either Meowth fucking Pikachu or Pikachu fucking Meowth, but something about that just didn’t sit right with me. Given the relationship Meowth and the rest of Team Rocket has on the show, where they’re mostly antagonists but occasionally allies, I can see how shipping could occur between members of the two groups. Meowth was even a part of Ash’s team for a few episodes in Best Wishes (though it was ultimately just a ruse). So maybe somewhere along the way they would’ve had the chance to hook up, but ultimately the status quo is that Meowth wants to catch Pikachu, and so Pikachu would likely never trust him enough to consent (outside of those rare moments where they’re allies), and Meowth’s attempts at catching him are ineffective enough that he probably wouldn’t get the chance to do much in a non-con type of way. So, this is the response I felt best reflected their relationship.