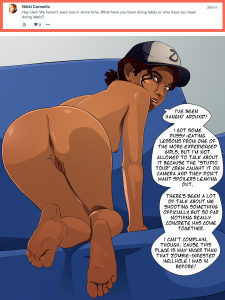 It’s true, I haven’t done anything with Clementine in a while. She’s an interesting character for me because I never would have drawn her (or even knew she existed) if it wasn’t for people supporting bringing her up. I like her design, but since I have no connection whatsoever to The Walking Dead (the comics, the shows, or the games), I never really think about her despite having several ideas. I’m still hoping to do a comic with her, but when it came to her answer I thought it’d be best to have her talk about stuff that might come out sometime this year (haha). She’s definitely gonna show up in a Studio Tour pic before too long, but there’s a couple other entries I have planned first.