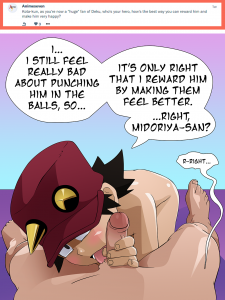 So Kota became an option for Character Asks after he appeared in his aunt’s NHML pic. For those who don’t know, Kota punches Midoriya in the balls early on, but comes to regret it later after Midoriya risks his life to save him. He brings up remorse for the punch a few times after being saved, so it made sense to me that he’d want to make amends for that by giving Midoriya’s balls some gentle loving.
Originally I was going to have Kota not wearing his signature hat, but then when I pictured him bashfully peeking out from under the brim the image was so cute I decided to keep it on. Hope you all like!