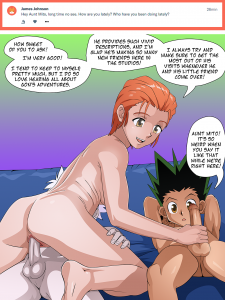 So this is a case where the character’s answer is kinda based on how I handle them in my work… Aunto Mito is a character who I like. I enjoy drawing her, but like the question mentions, it’s been a while. I only drew her once for a One-Shot comic back in March 2017. I haven’t drawn her since just because, well… I don’t have any good ideas for her. All I’ve got is pairing her with Gon and/or Killua, and I just figure people will get tired of that. So that’s why she says she likes to keep to herself. In the anime one of her roles is to read Gon’s letters, which serve as recap episodes, and I like to think she still gets to follow Gon’s career in the Near Hentai Studios. I don’t know if he still writes out full letters, but I’m sure he tells her all about his shoots with Killua, or the work he’s doing right now with the Freeman boys, or what have you. It’s also easier for him and Killua to visit when they’re not shooting content, since they all live in the same big studio complex, right?