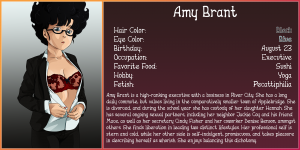 So I don’t believe Mrs. Brant had a first name at any point before. For the sake of this Bio entry, I decided to give her one. I really like Mrs. Brant, of the girls Mace and Jackie have teamed up on she’s probably my favorite. I’ve had several ideas for more content to do with her, some of which is hinted at in the text portion of this pic. I don’t know which of my ideas for her will get materialized first, but I’m confident she’ll show up in the Applebridge Snapshots series sooner or later.