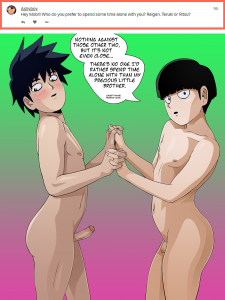 I’m not sure why I gravitated towards this Ask as the first one for this “batch”. I guess it’s partly because I immediately knew how I wanted to answer (Mob’s relationship with Ritsu is super cute, and I can’t picture him picking any other guy over him), and partly because I just haven’t done as much Mob Pyscho 100 content as I thought I would when I was watching the first season. I know some folks may be disappointed this pic’s not more lewd than it is, but I just really felt compelled to go more cutesy with this one. As for that smaller line of dialogue, Tsubomi-chan refers to the girl Mob crushes on from afar. I don’t have any plans to ever draw her, but it felt out of character for him to not at least think of her while giving his response. The mention doesn’t seem to have quelled Ritsu’s reaction to this answer any, though.