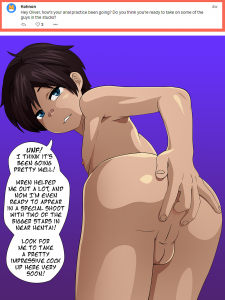 So, this question was posed before the September One-Shot was decided, but since Oliver has ended up involved in that comic (going public next month), his answer here is maybe a bit different than it would’ve been if I’d gotten to it earlier. Nonetheless, Oliver is going to get to have a little fun with some non-Applebridge characters in the studio, before he’s even gotten the chance to appear in his own Snapshot or anything. I guess that’s what can happen when a characters gets fairly popular right off the bat.