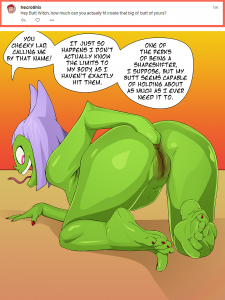 I hope everyone reads this answer in her voice! I wasn’t sure exactly how to answer this one, since Butt Witch’s shapeshifting powers aren’t super well-defined, but I figured leaving it vague would be good enough. Really I was just happy to have an excuse to draw her again, and while anal fisting is usually not my thing I figured I could go that route here to get her point across. I’m sure I could’ve gone a lot further with the demonstration, but honestly I just didn’t feel like taking it too far. I’ve seen other artists over-stuff a butt to comical levels, and it’s just not for me. We’ll just have to take her word for it that she could if she wanted to.
I also felt it necessary to have her acknowledge being referred to as the Butt Witch. It’s kinda tricky, since that’s not her real name and she clearly hates it any time someone calls her that in the show. However, we also don’t have another name for her (her henchman calls her “Ma’am”, and while it’d be funny if that turned out to be her name, it’s not something the show has confirmed at this time). So, Butt Witch is the proper way to address her for an Ask, but it’s also a nickname she hates, so I guess she’s gonna have to respond similarly any time she gets an Ask in the future, haha.