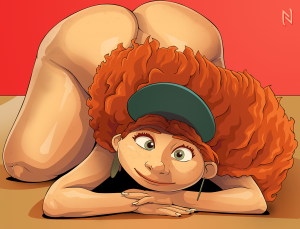 So some of you may remember back when Moana came out, the internet briefly became infatuated with this nameless character from the short before the film, Inner Workings. She doesn’t have a name or anything, but her character design and assets caught the attention of many people. Now, I don’t like jumping on trends, and tend to actively avoid them when I see them, so I didn’t participate the deluge of content she got at the time. However, I do really like this character. She’s got a super cute design (planet-sized ass aside, I like her face and hair style a lot, too), and I’ve also always had a soft spot for the thiccness. So I got the itch to draw her recently, now that the fad is well and over, and this is the result. Now, I don’t really expect to do much else with her (I have considered using her in some Xoverse content, for some reason I’d really like to pair her with a cute loli from some other 3D animation), her not having a proper name or much character to speak of make it difficult to do much of interest with her. I guess I’ll see how people react to this pic, if people have moved on and don’t hold much interest in her any more then I’ll be happy having drawn her just this once. If people still like her, though, I could see adopting her into more content, even though she doesn’t have a name. ^_^