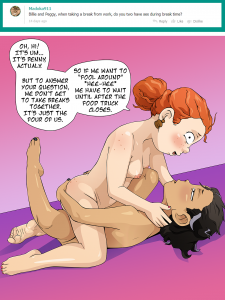 I was pretty happy to see Penny and Billie getting a little attention in the Character Asks. I can’t explain why, but I’m really drawn to both of them, and was excited about drawing them again. When I did my first pic of them I had them in full (and I mean full body) clown makeup, which is how they usually are portrayed in the show. However, not too long after I made that pic an episode came out that showed them closing up the truck, and taking off their makeup. So when I saw the nature of this Ask, and already reached the conclusion they probably wouldn’t have had breaks at the same time given the small crew, I figured this was a good chance to show their more natural after hours designs.