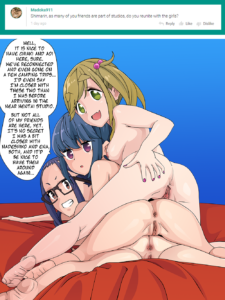 While I don’t expect them to become super prevalent in my work, I do want to draw the Laid-Back Camp girls more and this Ask was a good excuse to do it. Right now, these three are the only ones in the Studio officially (plus Rin’s mom), but eventually the others will make it in I’m sure. Nadeshiko has something in the works, though it’ll be a while before it’s finished. So Rin’s just had Aoi and Chiaki to camp with in the Studio, who are probably the two she’s least connected with in the original series. They’re friends, sure, but she’s much closer to Nadeshiko (as her new friend so goes camping with as a duo several times) and Ena, her only friend she seems to have had before the series starts.