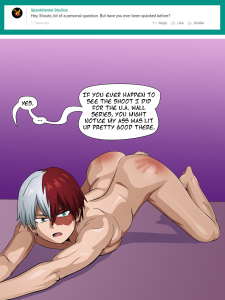 Every now and then I answer a Character Ask that’s basically just, “Yes, as seen in this image” and then they reference whatever older pic I did where that was covered. I usually try and avoid doing them too much, ’cause I don’t think they’re super interesting, but I picked this one up because I know a lot of folks wish I would draw Todoroki more and I thought a pose like this would be cute. Even though he’s speaking on past instances, I decided to go ahead and redden his ass for the answer, too, just because I figured the Asker would appreciate it.