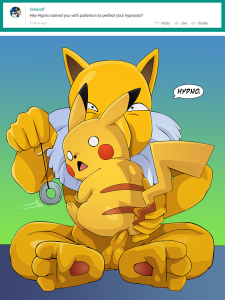 This questions been submitted to me every month for a while now, but I never picked it up because I just don’t like doing Asks where the person answering can only say their own name… But I figured some folks might like seeing something like this, and it was easy enough to portray without text, so it’s fine I guess. I went with Pikachu as the hypnotee just to mirror Ash being the first of the Hypno’s Harem series. When I looked to see if Pikachu had ever been hypnotized in the anime, I saw a scene where they gave him white eyes like this. So I took my cue from that as far as portraying the hypnotism.