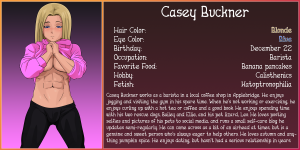 For the longest time, Casey was a rough design and vibe in my head, and I never really had a good idea for who he was. My friend Ccat helped me workshop him a bit, and I have a much better idea of what his deal is. I also realized while talking to her that I like the idea of him being a barista by trade, and upon deciding that I decided he needed to be part of the Food Court update of my Studio Tour game. So it’s a good thing I know who he is now, it’ll make it easier to write him for that, haha.