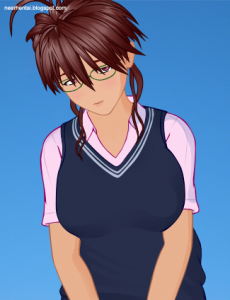 Despite her size, Michiyo is extremely shy and withdrawn. This is what drew Akimoto Kumiko to her. She is in a romantic, submissive relationship with Kumiko, despite the two being polar opposites (both physically and in terms of personality). Michiyo is very much infatuated with Kumiko, looking up to her (so to speak) as a model of what she would like to become.

Michiyo is on the volleyball team, volleyball being one of the few places where she feels comfortable. While not the most athletic member of the team, she’s still very good at it due to her vigor and resolve. Where Michiyo truly excels is in her studies, possessing a genius-level intellect that surpasses even Kumiko’s. She spends all her time before school studying, and all her time after school practicing volleyball. In between, she’s Kumiko’s toy.