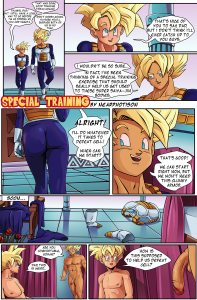 I hope fans of “Space Emperor Slut” can forgive me for this, but as I’ve been alluding to in my commentaries I have been working on a second DBZ comic, and here it is. “Special Training” came about after seeing several people (mostly on Paheal) responding to my picture “Before the Games”, asking to see Goku and Gohan interacting sans Chi-Chi. Well, I already had the idea in my head of the two of them getting frisky inside the Hyperbolic Time Chamber, so I wrote up this comic. My plan is to alternate between this comic and “Space Emperor Slut”, meaning the next DBZ comic page I post will be for that one. I know this makes my already unbearable slow update schedule even worse for people who only like one comic, but on the plus side it makes it that much less likely that I’ll get bored and stop doing one of them.