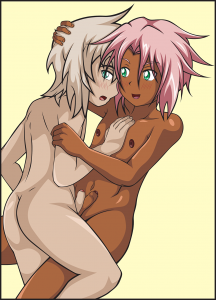 This is a picture drawn and colored by an artist known as Er Ar. The story behind this pic is that a couple months ago, Er approached me wanting to do an art trade. I wasn’t 100% on board with the idea, because I knew I likely wouldn’t be able to hold up my end of the trade any time soon, but Er talked me into it by promising that I could take all the time I needed. Predictably, other stuff kept getting in the way, to the point where I eventually offered to pay for the the other half (which was done pretty quickly) as a commission since I was worried about finishing my own. While Er at first told me that wouldn’t be necessary, I guess his financial situation changed and he accepted that arrangement. So I paid his commission price, and figured I might as well share the picture here with you guys.