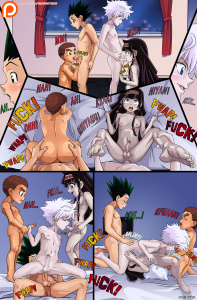 So this One-Shot idea showed up a few times, and I think it underwent a few revisions and changes when it cropped up (though I can’t be sure). I know at least there were a few different attempts to get Zushi and/or Alluka into some action with Gon and Killua. I was never a huge fan of these scripts, since I’m not really interested in either Zushi or Alluka, but apparently I’m in the minority on this as the idea finally won out last month. Here it is now one month after I finished the page, for the public. I hope you all like it.