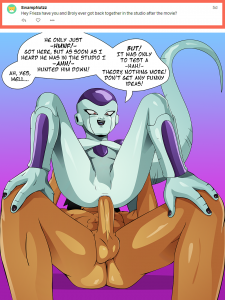 So, the deal with Frieza is that the canon version in the movies and show and such is pretty sexless… Obviously Studio Frieza does not have that problem. So when the sluttier Studio version found out Broly had made it to the Studio recently, he sought him out as we see here. Now, what this “theory” of his was, I cannot say. He’s been pretty tight-lipped about that.