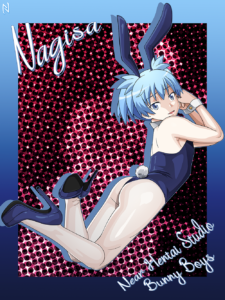 I saw something recently that got me interested in drawing cute boys in bunny costumes like this, and I started thinking of ways I could implement that. I thought maybe a pin-up series similar to the NHS MILFs series. So this is what that is, basically, a test-run of this bunny boy pin-up concept. I’m a bit worried that this might be too, I dunno… boring for people? Since the gimmick here is focused on a costume it’s a bit less explicit than what I usually draw, so I guess I’m just looking to see if something that’s cute but tame like this will get a good response. If people like Nagisa’s entry I’ll do more later, but if people seem disinterested in it then I probably won’t waste everyone’s time with more entries.