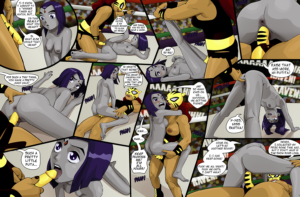 A while back I did a pic of Pantha fingering Raven in a wrestling ring, describing it as an alternate universe where Raven was sent to recruit her instead of Cyborg. I said at the time I was thinking of maybe doing a whole comic page dedicated to the concept and, well… That’s what this is. I had a bit of fun drawing Raven getting dommed by a much larger woman, and Pantha herself is pretty underrated in terms of the Titans smut out there. I did this comic in place of another DCAU villainess/heroine comic like the Batgirl and Supergirl ones, but it’s not part of that “series” (if you want to call it that), since Teen Titans is a different continuity and art style from the Bruce Timm animated series, plus Pantha’s not a villain.