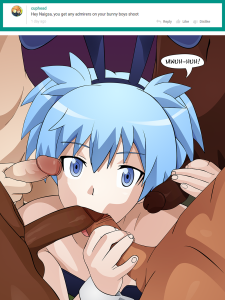 I considered pairing Nagisa up with another recognizable character in the Studio to represent a new fan of his or whatever, but I couldn’t really think of anyone that I liked for that role. Instead, I thought it’d be hot to show Nagisa swarmed by his new fans in the bunny costume from that pin-up. The Bunny Boys series is pretty tame, so this chance to show Nagisa being lewd in the bunny costume was a nice opportunity, I think.